Translate this blog to your language

is the great-great-great-great grandson of Stephen Moore through his eldest son, Robert. All members of the greater STEPHEN MOORE FAMILY are welcome to contribute material and comments. COMMENTS: To comment on any article, click on the word "comments" at the bottom of that article as in "0 comments." COPYRIGHT ©2009-2014 David E. Jeffreys - All rights reserved including all text and all images. Individual articles by other authors are copyright © by those individual authors and permission to use those articles including images must be obtained from that individual author.

LINKS related to this Blog

securely using PayPal.
Blog content will always be free, but your financial support is greatly appreciated to keep this blog financially successful. Suggested donation:
$25.00/year
Any amount though is welcome commensurate with the content you find helpful.
Thank you. 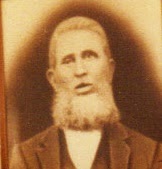 Barnette (pronounced "Bonnet") was my great grandfather.  He was one of three brothers to migrate from "AI" in Person County across the upper prong of the Flat River.  The brothers bought large acreage on which to build homes, families and farms.  Their father was Gilbert Moore (see Gilbert Moore Bible) who was the grandson of our illustrious Stephen Moore.

Barnette built a "dog trot" house which remained unpainted throughout its existence.  It was like two houses built on either side of a long hallway.  Probably built around the Civil War, it existed into my adult life.  The last folks to live in the house were Norfolk and Cleo Wrenn, who had moved into the old home as caretakers of the last Moores who lived there.

I remember Aunt Nellie Moore Pearce who died in Richmond in 1951.

In 1925, my grandparents' (William P. and Rosa Moore) cabin about a quarter mile away burned to the ground, when my mother was 15 years old.  The family went to live with Uncle Sam and Uncle Charlie, until the new and existing house that I call "Lady Slipper Cove" was built.  When Uncle Sam died in 1945, he left in his will enough money for his nieces, Aunt Alma and Mother to finish the upstairs portions of their homes. I was too young to remember Uncle Sam, being only 2 years old when he died. I do remember both attics at the farm and my home in Durham, before they were converted into upstairs bedrooms. Sam left his car to his nephew, my Uncle Bill.  Charlie and Sam were never married.

After the Wrenns built a small brick home within view of the old home, the Person County fire department was asked to burn down the old home, as it was in disrepair and a fire hazard itself.  My good friend and next door neighbor, Ed Wrenn now lives on that land.  He remembers the old wheelchair used by one of the sisters (probably Ella), who also probably suffered from the genetic disease (limb girdle muscular dystrophy), which I have today.

Also view my personal blog "Lady Slipper Cove" for more information about the land and my more recent family.
Posted by David Jeffreys at Wednesday, November 26, 2014 No comments: Posted by David Jeffreys at Friday, December 20, 2013 No comments:

Terri O'Neill said that she had family reasons to be in Durham, and suggested that it might be a good time for our Moore Research Committee to get together.  The committee consists of Terri O'Neill from Colleyville, Texas; Steve Moore from Murfreesboro, Tennessee; Sandra Moore Shoffner (with lot of help from her husband, Harry) from Mebane, North Carolina; and myself, David Jeffreys from Wilmington, North Carolina.  We all had the dates of July 8-12 available and decided to get together. At the reunion, we wanted to compare notes and notebooks, and visit Mt. Tirzah United Methodist Church and graveyard, and the Mt. Tirzah home, built by Stephen Moore, and its graveyard.  We decided to invite other members of the Moore family in the Durham and Person County area, who have been especially helpful with our research during the past few months.

Terri arranged to have the Duke Room at the Courtyard by Marriott in Durham on Monday afternoon for our "show and tell" and called Mt. Tirzah UMC for it to be open on Tuesday morning.  I arranged a tour of the Mt. Tirzah house, gardens, and graveyard with its present owner, Steve Cox, who is a good friend, for Tuesday afternoon.

Duke Room on Monday from 1:00 to 4:00pm:
We spread our books, notebooks, and albums across the tables in the front and back of the room.  Those present during the afternoon included Terri and Ken O'Neill, Steve Moore, Sandra and Harry Shoffner, myself, Harry T. Watkins, and Victor Bailey Moore, Jr.  Harry Watkins furnished me with these two pictures:
Here are a couple of pictures that I took: 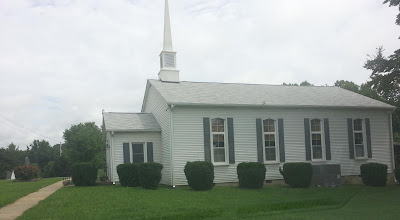 Pastor Jarrod Davis welcomed us and provided us with a history of the church.  Mt Tirzah United Methodist Church was originally built on land acquired from Sydney Moore for $1.00 in May, 1819. This original structure burned down sometime prior to 1888, and a new structure was built on a hill about a mile away from the original. This is the present Mt. Tirzah UMC building. The first worship service held in Mt. Tirzah UMC was on Christmas Day, 1888.  The location of the first church and its spring have been located to the south of the present church along Moore's Mill Road. 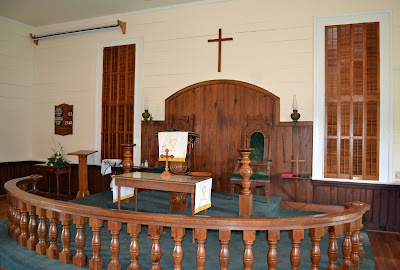 Terri's oral history says that her great-grandfather, John Luther Bradshaw was on location in 1888 to build the present church, so she was looking for more information about that.

Many local Stephen Moore descendants came to the church to meet with us. Among those who signed in were Anne M. Wolfe, Sandra M. Buchanan, Margaret (Noell) Puett, Pat Reade, Angela Wyche-Reade Jones, Wendy Reade Thompson, Robert Winston Carr, Clinton W. Toms III and Julia Carr Day.  Others also attended who did not sign in.

In an email after the reunion, Terri said, "Though you knew about it long ago, David, you couldn't recall the source of the Burgess Ticket, so it was great to see it and put a date on it, and learn where it resides with Margaret Noell Puett. She also solved the mystery of what happened to the original miniature portrait in black and white of Stephen Moore. It was in her Noell family and was lost in a fire years ago, along with two small paintings of the graves of Stephen and Grizey."   Terri stood in the vestibule of the church and carefully transcribed the Burgess Ticket. (More on the Burgess Ticket in another post.) 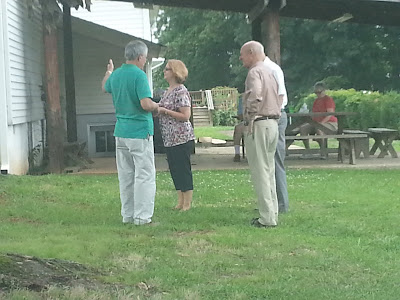 Stephen Moore House, Gardens, and Graveyard Tour on Tuesday afternoon:
Approximately 15 Stephen Moore descendants arrived just after 1:00pm for a tour of the gardens, house, and family cemetery.  Stephen Cox bought Mt. Tirzah from the Reade family in 1985 and has done a magnificent restoration of the house and gardens.

First Steve Cox led us on a tour of the gardens.  Note that Mt. Tirzah is the hilltop of a mountain from which you can see in the north, east, and south directions. 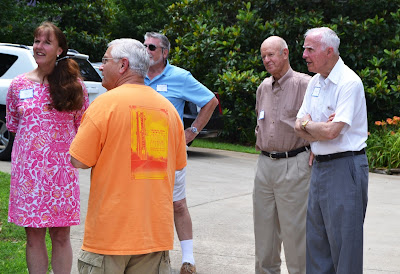 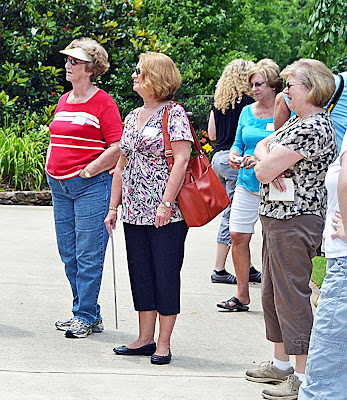 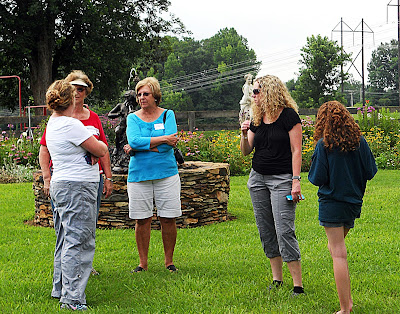 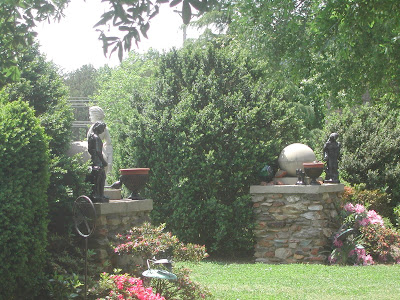 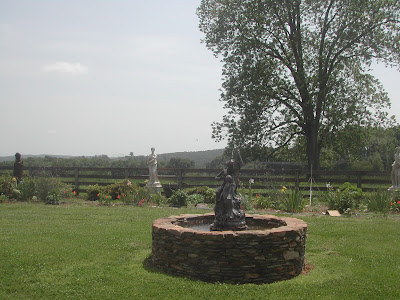 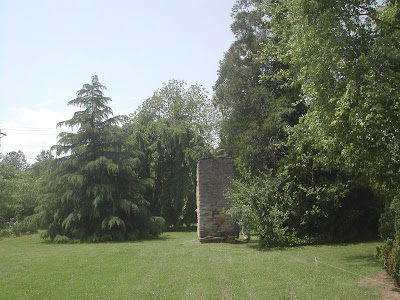 Following the tour of the gardens, Steve Cox led us into the front entrance through the enclosed porch and into the parlor.  He started the tour by explaining the repair that had to be done to the building and remarking about the fireplaces and original stairs that were moved during Stephen Moore's first addition.  Above the fireplace is a beautiful painting, which Cox described as to its relevance to the house.  The Shoffners had presented him a large copy of the Stephen Moore Portrait Painting, which had been recently discovered.  When Cox entered the room, he placed the portrait in a chair beside the fireplace.  Someone asked him where he thought he might hang the portrait in the house.  Cox responded: "I think he looks pretty comfortable sitting in that chair."
For privacy reasons, Steve Cox, does not permit  photographs inside the house because he doesn't want them to appear on the internet, but he did give me permission for the above picture.  Therefore, you will see no more interior pictures.

From the parlor, Cox led the group up the stairs on the west end of the parlor to the area above which would have been the nursery and the Moore's bedroom.  Further upstairs are another bedroom on the east side of the chimney.  There are fireplaces in both bedrooms upstairs, as well as in the parlor and dining room downstairs.  Back downstairs, the group went into the north 1880s addition, which today is a library and master bedroom.  Finally, he took them down into the basement, so they could see the infamous stone with the date "1778" carved in it. 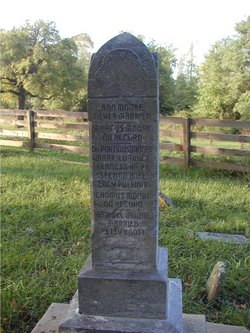 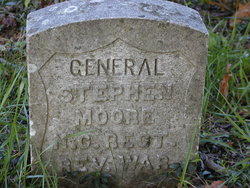 Stormy weather began to move in, so the group was led by Cox down to the family cemetery, where Stephen Moore is buried.  Just as they returned to the house, there were two large claps of thunder, followed by a rain shower.

Posted by David Jeffreys at Sunday, August 04, 2013 No comments: 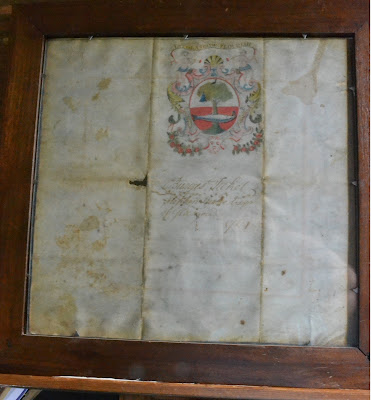 At Glasgow the ninth day of January one thousand seven hundred and sixty four years the which day presence of the right honorable Archibald Ingram Esq. Lord Provoost of the said city Walter Brock, Alexander Mackie and Duncan Vivien Baillies thereof George Brown Dean of Guild and Sundry of the Guild Council of said city Stephen Moore Esq. Merchant in Quebec is admitted and received Burgess and Guild Brother of the said city and the whole liberties, privileges immunities  belonging to a Burgess and guild brother in most ample form who gives his oath of Fidelity as use is extracted forth of the Guild Books of the said city by Archibald M Gilchrist