Translate this blog to your language

is the great-great-great-great grandson of Stephen Moore through his eldest son, Robert. All members of the greater STEPHEN MOORE FAMILY are welcome to contribute material and comments. COMMENTS: To comment on any article, click on the word "comments" at the bottom of that article as in "0 comments." COPYRIGHT ©2009-2014 David E. Jeffreys - All rights reserved including all text and all images. Individual articles by other authors are copyright © by those individual authors and permission to use those articles including images must be obtained from that individual author.

LINKS related to this Blog

securely using PayPal.
Blog content will always be free, but your financial support is greatly appreciated to keep this blog financially successful. Suggested donation:
$25.00/year
Any amount though is welcome commensurate with the content you find helpful.
Thank you.

[EDITOR'S NOTE]: For those of you who attended the 1991 West Point Reunion, do you remember visiting the Thayer Award Room?  One of those who was given this prestigious award was a member of our Stephen Moore Family.  James E. Webb received that recognition in 1981.  In addition, Webb was presented with the Presidential Medal of Freedom by President Lyndon Johnson in 1969.  His recognition continues to this day, as the future telescope that follows the Hubble was named the James Webb Space Telescope in 2002.  Thanks to Thompson Webb, III who directed me to this site.
[From Wikipedia, the free encyclopedia, accessed 24 January 2010.]
James Edwin Webb (October 7, 1906 – March 27, 1992) was the second administrator of NASA, serving from February 14, 1961 to October 7, 1968.
Webb oversaw NASA from the beginning of the Kennedy administration through the end of the Johnson administration, thus overseeing all the critical first manned launches in the Mercury through Gemini programs, until just before the first manned Apollo flight. He also dealt with the Apollo 1 fire.
The planned scientific probe (launch now scheduled 2014) originally called the Next Generation Space Telescope (NGST) was renamed in 2002 as the James Webb Space Telescope to honor Webb's memory.
Biography


Early years
Webb was born in the hamlet of "Tally Ho", Granville County, North Carolina; Webb completed his college education at the University of North Carolina at Chapel Hill, where he received an A.B. degree in education in 1928. He was a member of the Acacia Fraternity. Webb became a second lieutenant in the United States Marine Corps, and he served as a Marine Corps pilot on active duty in 1930-32. Webb then studied law at the The George Washington University Law School in 1934-36, and he was admitted to the Bar of the District of Columbia in 1936.
Career
Webb enjoyed a long career in public service in Washington, D.C., first serving as a secretary to the North Carolina Congressman Edward W. Pou, in 1932-34. He next served as an assistant in the office of O. Max Gardner, an attorney and former governor of North Carolina, in 1934-36. In 1936, Webb became the personnel director, the secretary-treasurer, and later the vice president of the Sperry Gyroscope Company in Brooklyn, New York, before he re-entered the Marine Corps in 1944 during World War II.
After World War II, Webb returned to Washington and served as executive assistant to O. Max Gardner, by then an Under Secretary in the U.S. Department of the Treasury, before being named as the director of the Bureau of the Budget in the Office of the President of the United States, a position that he held until 1949. President Harry S. Truman next requested for Mr. Webb to serve as an Under Secretary of State in the U.S. Department of State. When the Truman administration ended in January 1953, Webb left Washington, D.C., for a position in the Kerr-McGee Oil Corp. in Oklahoma City, but he was still active in government circles, for instance serving on the Draper Committee in 1958.
NASA
Webb returned to Washington in 1961 when he accepted the position of the Administrator of NASA. Under his direction, the agency undertook to achieve the goal set by President John F. Kennedy of landing an American on the Moon before the end of the decade of the 1960s through the success of the Apollo program. For seven years after President Kennedy's May 25, 1961, announcement of the goal of a manned lunar landing, through October 1968, Webb endeavored for support for NASA in Congress. As a longtime Washington insider, and with the backing of President Lyndon B. Johnson, he was able to acquire continued support for and resources to accomplish the Apollo Moon landing on the schedule President Kennedy had announced.
During his administration, NASA developed from a loose collection of research centers into a coordinated organization. Webb had a key role in creating the Manned Spacecraft Center, later, the Johnson Space Center, near Houston, Texas. Despite the pressures to focus on the Apollo program, Webb ensured that NASA carried out a meaningful program of planetary exploration with the Mariner and Pioneer space probe programs. 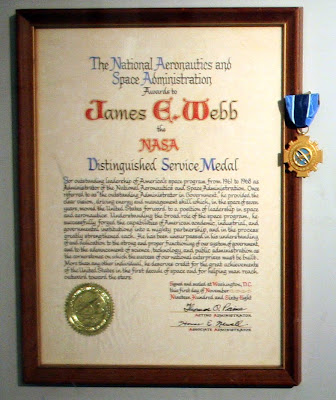 NASA Distinguished Service Award and medal
Webb was in the leadership of NASA during the Apollo 1 accident in 1967. Webb told the media at the time, "We've always known that something like this was going to happen sooner or later. ... Who would have thought that the first tragedy would be on the ground?" Webb went to President Johnson and asked that NASA be allowed to handle the accident investigation, and to direct its recovery from the accident. He promised to be truthful in assessing blame, and he pledged to assign that to himself and NASA management, as appropriate. The agency set out to discover the details of the tragedy, to correct problems, and to continue its progress to the Apollo 11 lunar landing.


Webb reported his investigation's findings to various Congressional committees, and he took a personal grilling at nearly every meeting. Whether by happenstance or by design, Webb managed to deflect some of the backlash over the accident away from both NASA as an agency and from the Johnson administration. As a result, NASA's image and popular support were largely undamaged.
However, Webb was a Democrat tied closely to Johnson, and, with Johnson choosing not to run for reelection, decided to step down as administrator as this would allow the next president to choose his own administrator. [1]
Webb was informed by CIA sources in 1968 that the Soviet Union was developing its own heavy N1 rocket for a manned lunar mission, and he directed the MSFC to prepare Apollo 8 for a possible lunar orbital mission in 1968. At the time Webb's assertions about the Soviet Union's abilities were doubted by some people, and the N-1 was dubbed "Webb's Giant". However later revelations about the Soviet Moonshot - after the collapse of the USSR - have given support to Webb's conclusion. Webb left NASA in October 1968, just before the first manned flight in the Apollo Program was scheduled for launch.
In 1969, Webb was presented with the Presidential Medal of Freedom by President Lyndon Johnson.
Personal life
After retiring from NASA, Webb remained in Washington, D.C., serving on several advisory boards, including serving as a regent of the Smithsonian Institution. In 1981, he was awarded the prestigious Sylvanus Thayer Award by the United States Military Academy at West Point for his dedication to his country.
Webb was married to Patsy Aiken Douglas in 1938, and they had two children: Sarah Gorham Webb (b. 1945), and James Edwin Webb, Jr., (b. 1947). He died in 1992, and was buried in the Arlington National Cemetery.
Legacy
In the 1998 miniseries, From the Earth to the Moon, Webb was played by Dan Lauria.
NASA's planned James Webb Space Telescope was renamed in Webb's honor in 2002. The telescope is referred to as "the Hubble successor".
Bibliography
• W. Henry Lambright, Powering Apollo: James E. Webb of NASA; Baltimore: The Johns Hopkins University Press, 1995; ISBN 0-8018-6205-1
• Piers Bizony, The man who ran the moon: James E Webb, NASA, and the secret history of project Apollo; New York: Thunder's mouth press, 2006; ISBN 1-56025-751-2
References
1. http://www.lbjlib.utexas.edu/Johnson/archives.hom/oralhistory.hom/WEBB-J/webb.pdf Webb oral biography. Transcript, James E. Webb Oral History Interview I, 1969/04/29, by T. H. Baker, Internet Copy, LBJ Library. Accessed May 28, 2009.
2. Portions of this article are based on public domain text from NASA.
3. Encyclopaedia Britannica, James Edwin Webb
4. Transcript, James E. Webb Oral History Interview I, 4/29/69, by T. H. Baker, Internet Copy, LBJ Library.
Posted by David Jeffreys at Monday, January 25, 2010